we're sticking with the martial arts with Alexander's Festival Hall's  Judo (What We've Been Playing), solid POP from a man with an impeccable pedigree... the Next AFH show (it would be crass to call it a gig) is on January 18th at 93 feet east... see you there 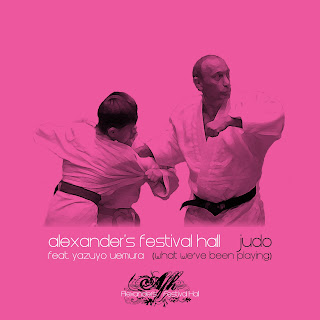 Judo was, of course, just one among many sports about which I knew next to nothing when I began this project. Aside from a passing and rather unsportsmanlike interest in the prospect posed by beach volleyball on the Mall (whose strange non-sequitur locational inclusion of "beach" momentarily sparked the possibility of other more interesting Olympic sports: supermarket fencing, nightclub wrestling, Westfield archery, etc. but I digress...) and despite living about 40 metres from the stadium, I hadn't actually been thinking about the Olympic events at all. A gammy leg as a child (in medical terms a rare condition where your leg decides on balance it could be doing so much better somewhere else...) was one among many factors in rendering sporty-athletic-speedy-lifty feats somewhat distant and dull, all red-faced competition and contestants you can't possibly have heard of. And yet faced with the delicious challenge of writing an uptempo sporting theme, the penny dropped that here, at last, was the perfect occasion to channel some JPOP in the name of a truly fine musical compilation. So, self and collaborator Yazuyo Uemura present for you ... "Judo (What We've Been Playing)". See you on the mat!

Written, arranged and produced by Alexander Mayor
Posted by wiaiwya at 01:44