Jeff Mellin has been around since time began, as a solo artist, a member of Miss Mary's band, one of the Eddies, a writer, an artist, a creative director, and an all round good guy... he is a brother, a son, a grandson, and has recentely added father to his list of achievements... he comes from Philadelphia, so knows more than most about boxing... despite what he says, don't hit him 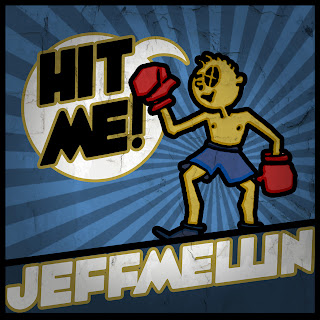 Is it talking to you? Is it talking to you? Well it’s the only one here. It’s in this corner weighing in at 190 lbs. It’s supposed to take the fall in the fifth round. It’s gonna come out swinging and keep it clean. It floats and stings. It’s a lean mean grilling machine. It’s the heavy from the featherweight division. It’s a southpaw to a glass jaw. It fought the law and the law won by split decision. It ain’t a pretty picture: It’s on the canvas. It’s down for the count. It’s up against the ropes. It’s rope-a-dope. It’s a great white hope. It’s gonna need a bigger boat. It’s saved by the bell. It’s Howard Cosell. It’s Smokin’. It’s Marvelous. It’s Nonpareil. It’s a thrilla in Manila. It’s a rumble in the jungle. It’s so mean, it makes medicine sick. It’s gonna go the distance. It’s gonna fly now. Can it swim? With a name like Rock? It’s got the eye of the tiger, baby. It’s nibbling at your ear. It’ll be back before you can say “blueberry pie.” It don’t pull punches or hit below the belt. It pities the fool. It’s gloves are off. It’s Raging. It’s Iron. It’s Sugar. It falls harder when it’s bigger. It’s what a poor boy can do besides sing for a rock ‘n’ roll band. It killed Davey Moore. It’s the one the authorities came to blame. It’s laying out its winter clothes and wishing it was home, going home. It’s the Greatest, but Vietnam? It won’t go. It’s a million-to-one shot, a steady-cam TKO. Yo, Adrian, we did it. We did it, Adrian. Yo.