DJ Downfall - Shoot It Shoot It (Hit Me Again)

DJ Downfall has been on the label for 15 years now, made two great albums, and has been working on the third since 2007 (next time you see him remind him to finish it off would you?)... one of the reasons it's taking so long is that last year he took up archery (so he knows what he's talking about)... despite what he says, don't hit him again... 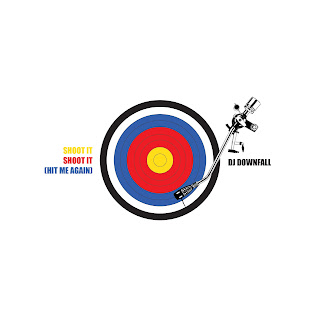 "I shoot. I try and shoot every morning in my house.

I have a stack of foam a metre on each side, known as a boss, which sits outside in the yard and gets rained on. Every morning that I can I drag it inside, put it by my living room wall, and attach a target face with pins; sometimes the familiar ten-ring FITA targets with a gold and an X-ring in the centre; sometimes an offset trio of small targets known as a Vegas three-spot. I usually leave the bow assembled in the cellar, ready and taut and sighted. I attach the long rod, a stick with weights on the end intended to bring the centre of gravity forward and reduce the torque that can come from the hand.

My bow is partly made from wood, but it's mostly made from drop forged aluminium alloy, high impact plastics, Dacron, steel, magnets, carbon and composites and God knows what else. It measures sixty-eight inches from beautiful curving tip to beautiful curving tip. The recurve of the limbs (the parts that bend and store the power) is the graceful genius of man expressed in elegant modern form. To deliver energy as efficiently as possible, to focus the power of the slow arm onto a fast single point. A bow is an expression of what it is to be human; not the fastest, not with terrible teeth or claws or poison to hunt and defend, but with a big brain and opposable thumbs and imagination. What I have in my hand is the culmination of what happened when some hungry Paleolithic man pulled on a sapling tree, watched it snap back fast, and wondered.

Taking all this into account, I stand in my kitchen with my feet side on to the hallway. I pick up one of my arrows, twenty inches of tungsten, aluminium and plastic rather than flint, wood and feathers. The notch at the back, known as a nock, clicks gently onto the string as the shaft sits on a tiny steel rest. I raise the bow, letting the handle push into the webbing of my relaxed left hand, and grip the string with three fingers of my right hand, covered with a leather tab. I swing up and let the sight settle, and start the draw, trying to control; to use my back. At full draw, nineteen and a half inches, there is about twenty eight pounds of weight on my fingers. The longbows they recovered from the Mary Rose had draw weights varying between ninety and one hundred and eighty pounds in weight.

I anchor underneath my chin, pushing the string onto the tip of my nose. Find the gold. The release should be just that. Loose. Let go. Relax. Do nothing. My bow will propel an arrow at around one hundred and seventy feet per second, the huge recurves they use in the Olympics for the 70m distance will do nearly double that. In about one-sixth of a second, the arrow leaves the rest, bending and fishtailing with the excess energy and strikes the target eight and a half metres away. I repeat, and repeat, exploring my concentration, the connection between my mind and my muscles and this beautiful technology, the human spirit: condensed, graceful, lethal.

Anyway, never mind all that. This is a love song"

written, performed and produced by DJ Downfall
Posted by wiaiwya at 12:34